Block chain helps cross-border trade and payment and liquidation, blocks block anti money laundering, tracing the source of ancient trees, Puer and high-end baijiu. The new generation information technology block chain has developed its skills in various fields by virtue of its unique technical advantages, and various application scenarios have been gradually demonstrated. Who is the leader of Western blockchain innovation?

On October 27, the western regional competition of the 5th China blockchain development competition was held in Chengdu. 13 teams from 10 provinces and regions including Sichuan, Chongqing, Guizhou, Yunnan and Xinjiang compete for the national finals.

It is understood that with the theme of "standard leading and innovation driven", this competition is hosted by China Institute of electronic technology standardization and Chengdu new economic development committee, and organized by China blockchain technology and Industry Development Forum and Sichuan blockchain Industry Association. After a day of fierce competition, the competition decided to win 1 first prize, 2 second prizes, 3 third prizes, 7 Excellence Awards, and 6 teams such as cloud chain RONGTONG and titanium Rongyi were shortlisted for the national finals. 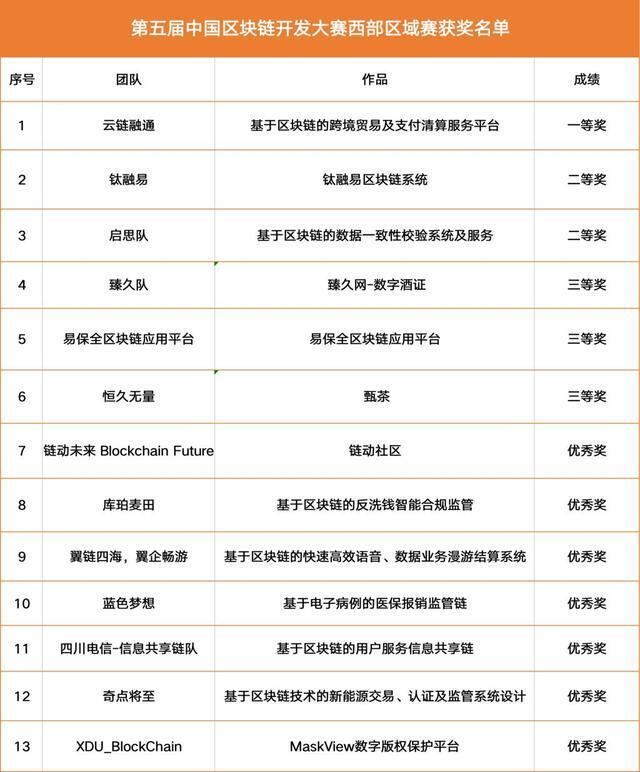 What is a standard? Li Ming said that the most fundamental thing for any industry is to have standards, and only when there are standards can there be a baseline. Just like WiFi and Bluetooth, if they don't meet the standards, they can't access the network.

Li Ming said that standardization does not come out of thin air. We must conduct a detailed study on the whole technology, application and industry to find out the object and scope of standardization, so as to truly form relevant national, industrial and local standards. 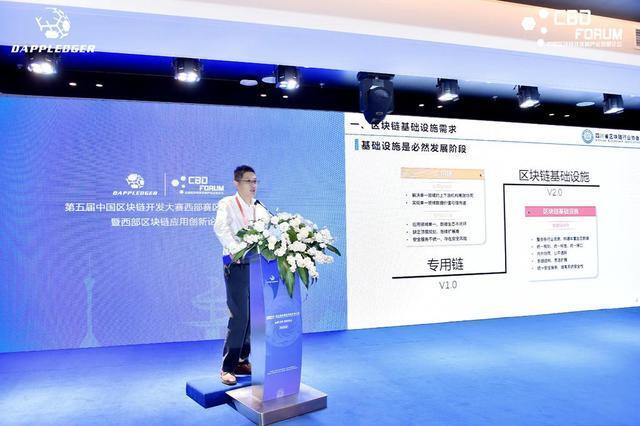 Blockchain is a technical system that "encapsulates" data. In short, this standard will specify which interested parties and functional components of the system exist in the blockchain. For example, what role does an enterprise play in blockchain related industries, as a technical service provider, as a user, as a software developer, or as a third party.

"If we simply look at standards, they are just a few pieces of paper. We need to really apply standards to the industry through talent training, development competitions, laboratories, application demonstration, open source communities, and even combined with capital." Li Ming said that in the future, China Institute of electronic technology standardization will also study standards and develop evaluation systems based on the standard system, Build a benign ecology based on the evaluation system.

The number of applicants in Sichuan ranks first in China

Since the first China blockchain development competition was held in 2017, the performance of the participating teams also reflects the increasingly mature development of the domestic blockchain industry. In the fifth competition, the application of supply chain management, government services, financial services and blockchain has become more and more extensive and in-depth.

Li Ming said that in these five years, Sichuan's blockchain development advantages have gradually emerged. The biggest feature is the cluster effect. Sichuan's blockchain enterprises are evenly distributed in various fields, covering platform, security and application. There are outstanding enterprise representatives in all directions. Li Ming believes that the blockchain industry in the western region, especially in Sichuan, will develop by leaps and bounds in the future. 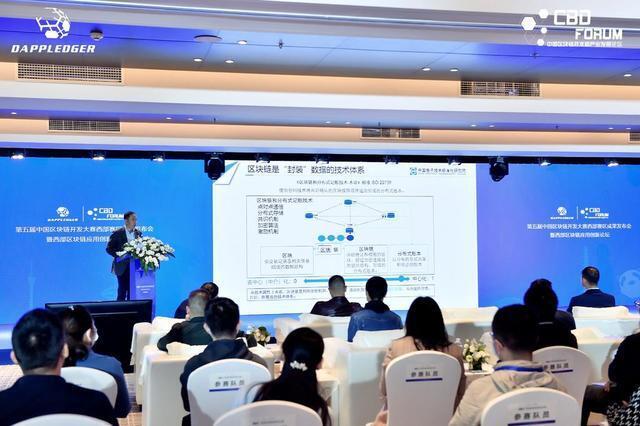 The data are also confirming Li Ming's judgment. As the main battlefield for Sichuan to develop blockchain, Chengdu has performed well in recent years.

Zhou Cheng, member of the Party group and deputy director of Chengdu new economic development committee, revealed at the meeting that blockchain, with its unique advantages and technical characteristics, promotes the transformation of the Internet from information transmission to value transmission, and reconstructs the information industry system and digital economy ecology.

By 2020, there are 831 blockchain enterprises in Chengdu, with a year-on-year increase of 178.9%. There are not only domestic well-known local enterprises such as China NETAN, Sichuan Changhong, Sichuan Shangtong, xunla technology, LianBo technology and Xinhua Wenxuan, but also industry leaders introduced from abroad such as interesting chain technology, covering platform R & D, technical support, application services and other fields, with outstanding competitive advantages.

The blockchain industry began to enter a new inflection point

An Hongzhang, Secretary General of Sichuan blockchain Industry Association, noted that blockchain has been different from the previous business since 2020. The original format is an application that blooms everywhere. However, after 2020, large platforms, national chains and regional chains are often mentioned, and there are fewer and fewer small dedicated chains.

For blockchain, we must solve the "base problem", that is, large infrastructure. An Hongzhang introduced that now we have a national infrastructure platform, such as spark chain led by the Ministry of industry and information technology; Each region also has regional platforms, such as Shuxin chain in Sichuan and Chang'an chain in Beijing. 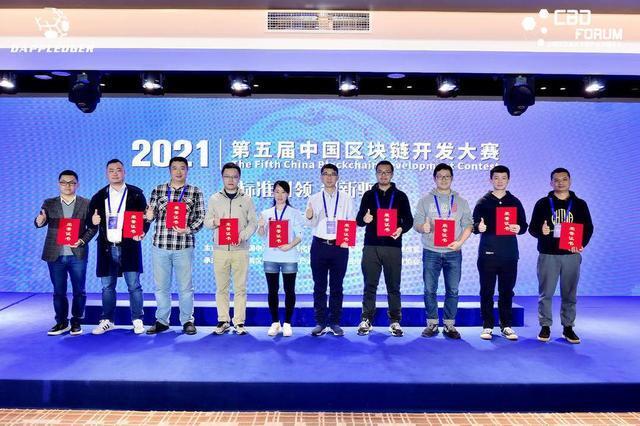 On these blockchains, nodes in different regions and industries have been built to create application ecology in different industries. Above the ecology is the application layer, serving government affairs, finance, private development, medical treatment and other fields.

According to an Hongzhang, just a few days ago, the blockchain trusted service organization alliance was officially launched in Chengdu. "Our enterprises engaged in blockchain services should work together and take standards as the link to promote the coordination of facilities and ecology." an Hongzhang said that we should eliminate our trust barriers, truly give full play to the value of blockchain and empower the development of digital economy.

DPTech is co-founded by several senior European and American security experts, and a core security R&D team with international first-line talents is committed to improving the overall security, privacy and usability of the blockchain ecosystem. By publishing industry trend reports and real-time monitoring of ecological security risks, it provides customers with visual solutions that meet international advanced security technology standards, and strengthens network security monitoring, early warning and defense capabilities. After years of accumulation of blockchain experience, DPTech has been recognized by dozens of well-known exchanges around the world.
Email: service@dpanquan.com
cache
Processed in 0.005758 Second.