According to market demand and user feedback in the last round of testing, Smoothy has officially launched version 2.0 after months of development. The new version will provide a single currency pool that can hold more than 20 different stablecoins (in contrast, Curve can support up to 4 stablecoins in a pool). Smoothy further reduces the GAS fee through algorithm optimization. Now, the fee only accounts for about 10% of yPool on Curve's gas fee.

Currently, Smoothy 2.0 has been tested and reviewed. The earliest mining activity will start at 2 a.m. UTC on March 9th. By then, users will be able to enjoy the benefits of Smoothy, such as a single pool, low gas fee, low delay and high LP rewards.

Smoothy is a novel stable currency exchange protocol that can support more than 20 stable coins in a pool, and has the functions of low cost, low slippage exchange and LP earning maximum interest.

After algorithm optimization, compared with Curve's yPool and mStable, even if deployed on Ethereum, the gas fee for stable currency exchange on Smoothy has been reduced by 90%. No need to use Layer2 to reduce gas fees and ensure composability. 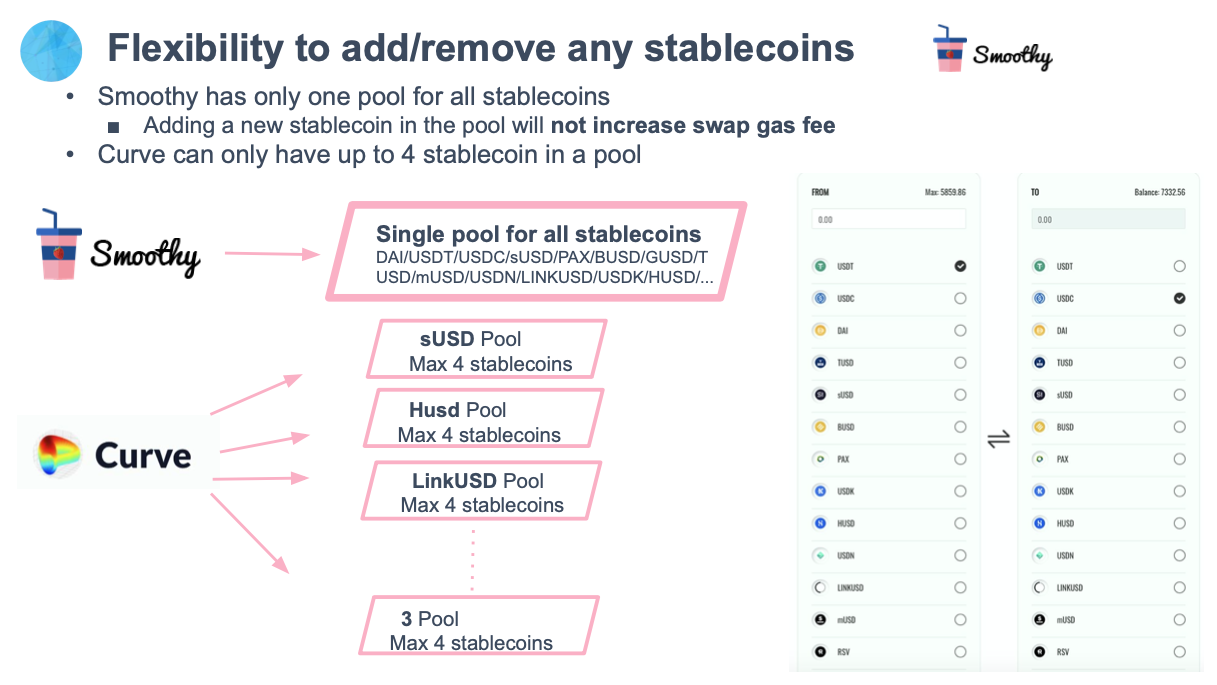 With reference to the bank's reserve fund system, we have designed a unique dynamic cash reserve algorithm, which can dynamically allocate most of the funds to potential interest-earning platforms, and the rest can meet daily exchange needs. In other words, in addition to governance token revenue, liquidity providers can also obtain exchange fees, interest income and lower gas fees. 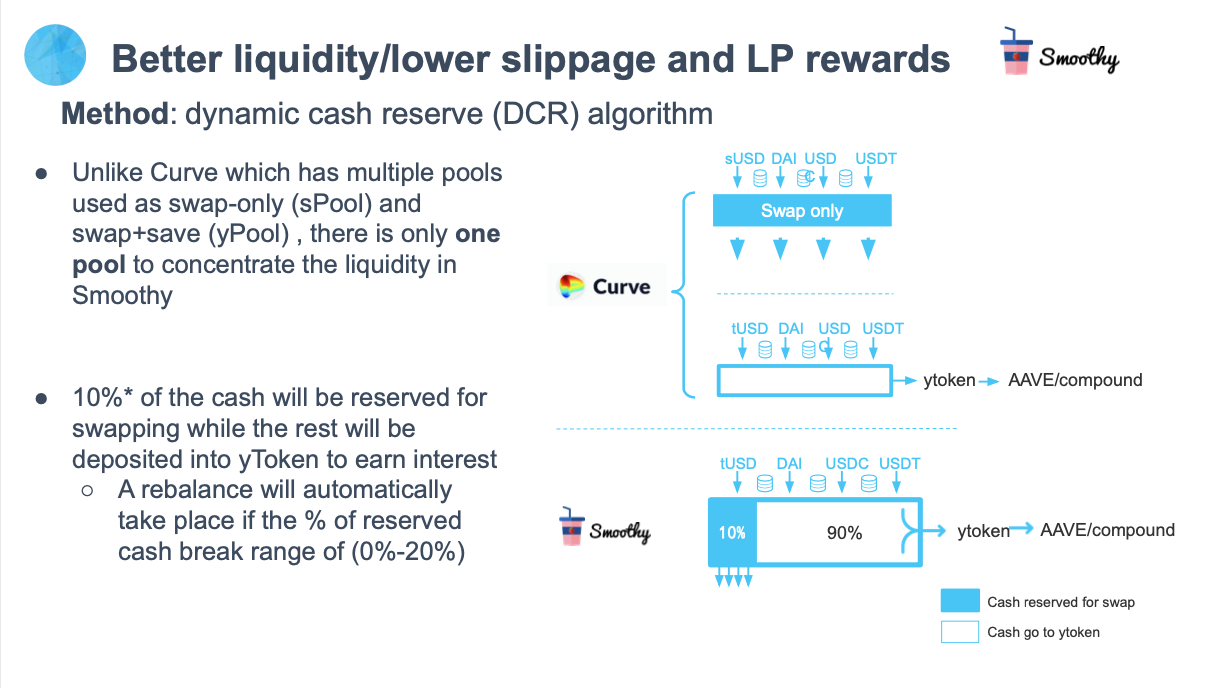 Smoothy has developed the SmoothSwap algorithm. If the percentage of tokens in the pool is lower than the soft weight, the 1:1 ratio exchange can be guaranteed in most cases. If not, you can still conduct swap transactions by charging a fine as a delay. 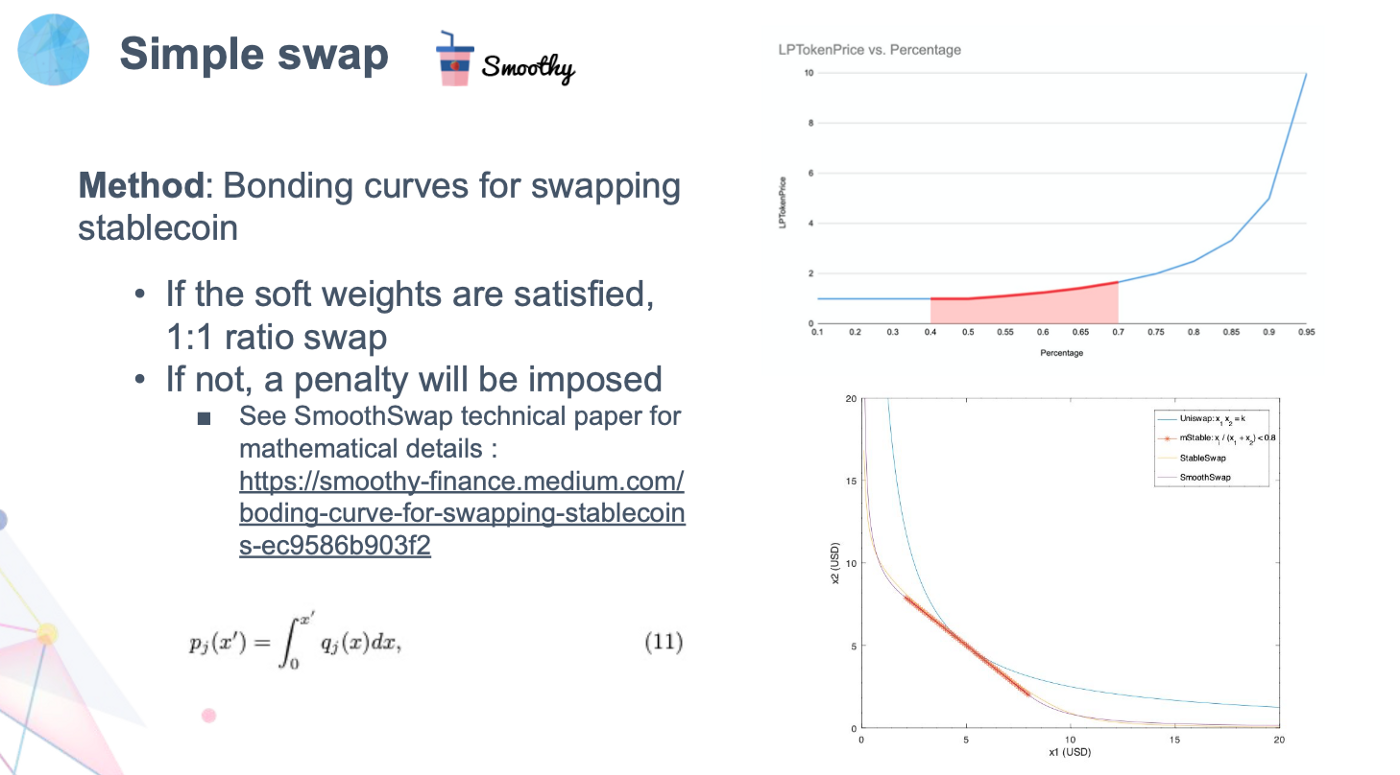 Comparison between Smoothy and other protocols (Ethereum as an example): 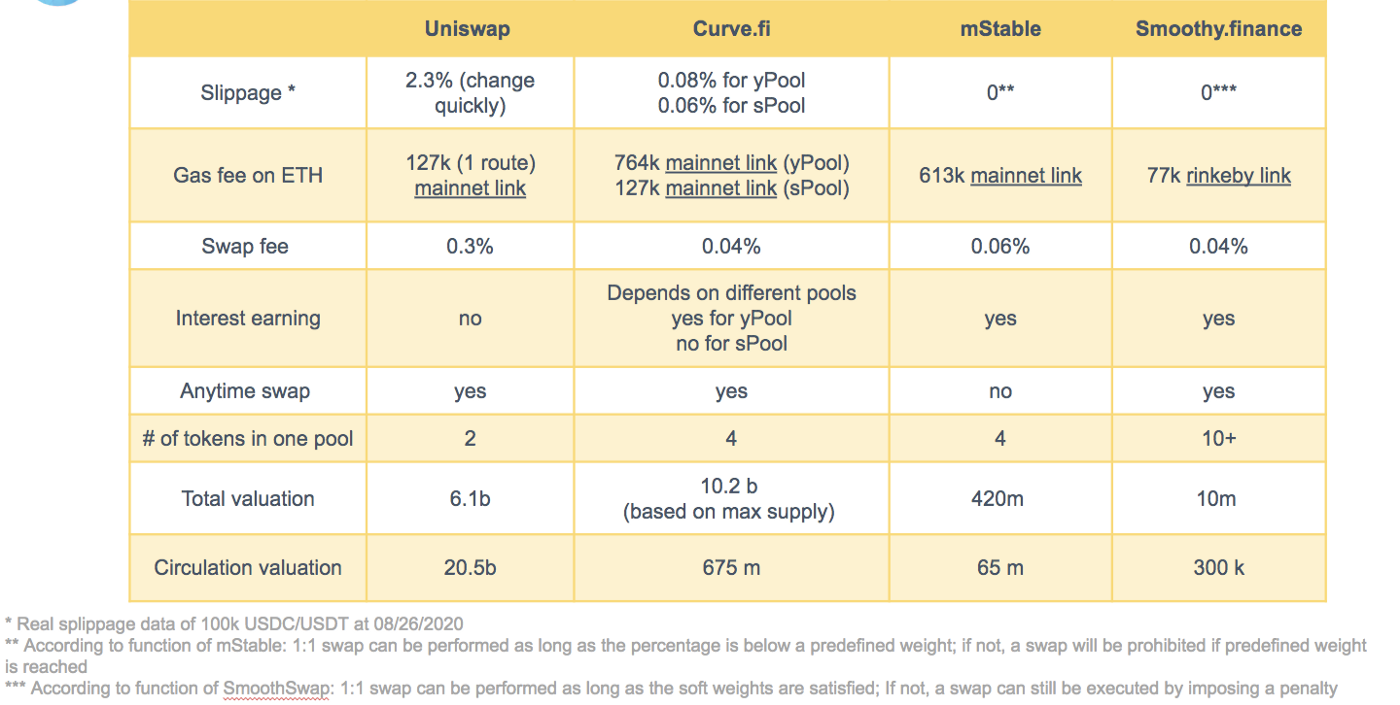 SMTY is the governance token of Smoothy:

Currently, Smoothy has been deployed on Ethereum. This is just the beginning, it will be gradually deployed on other public chains, such as Fantom, BSC, Heco, etc.

The first round of mining will start at 2 am UTC on March 9th and will last about 21 days. At that time, users can experience all the product features of Smoothy. In addition, all addresses that interact with the Smoothy contract in some way will have the opportunity to receive an airdrop.

LPs that provide liquidity for Smoothy will receive conversion fees, fines (when redeeming outside the soft range) and interest (currently, only stablecoins interested in yToken can generate interest after accumulating >= 10 million liquidity ).

50% of SMTY will be used for community incentives, including liquidity mining, of which 0.5–1% will be used for initial mining activities. The rewards will be distributed after the public sale, please refer to the announcement for details later.

The contract security audit has been carried out by Peckshield. At the same time, we invite more audit companies to conduct more audits to ensure the safety of the project. https://smoothy.finance/PeckShield-Audit-SmoothyV1-v1.0rc.pdf

DPTech is co-founded by several senior European and American security experts, and a core security R&D team with international first-line talents is committed to improving the overall security, privacy and usability of the blockchain ecosystem. By publishing industry trend reports and real-time monitoring of ecological security risks, it provides customers with visual solutions that meet international advanced security technology standards, and strengthens network security monitoring, early warning and defense capabilities. After years of accumulation of blockchain experience, DPTech has been recognized by dozens of well-known exchanges around the world.
Email: service@dpanquan.com
cache
Processed in 0.008633 Second.